Streets of Rage 4, known as Bare Knuckle IV in Japan (ベア・ナックル IV), is a side-scrolling beat 'em up developed by Guard Crush Games and Lizardcube, released by Dotemu in April 30th, 2020 for the PlayStation 4, Nintendo Switch, Xbox One and PC. It is the first new installment in the series since Streets of Rage 3 released in 1994. The game takes place around 10 years after the events of Streets of Rage 3.

Ten years have passed since the fall of Mr. X and his Syndicate. The city has been at peace... until now. A new crime empire has arisen, corrupting everything good in the city. It is rumored to be led by Mr. X's own children: the Y Twins.

Together these four vigilantes stand against the Y Syndicate on the... Streets of Rage.

Streets of Rage 4 carries on the style of previous entries in the series. Players advance from left to right on each stage, defeating enemies as they go. Players can pick up healing items and weapons. At the end of each stage the player must face the boss.

Combat has been greatly refined, such as players being able to juggle opponents against each other and walls for extended combos, as well hit enemies that are on the ground with low attacks that lifts them, allowing for more juggling.

Combo are calculated on consecutive hits that deal damage to the enemies (hitting an breakable object and picking up health/point items will prolong the combo but not increase the counter). Taking any form of direct damage or taking too long to hit enemies will reset the combo counter. There are different level of combos, with highest value achieved displaying message "OUT OF THE WORLD!!!" once the combo counter resets. Out of The World combos are critical for high score and achieving S Rank. Counter has not a linear increase but exponential: that means that one consecutive combo of 100 identical hits would generate a much higher score than, for instance, 4 split combos each of 25 hits.

New to the gameplay formula is a revamped Special Attack system, where after using one, a green gauge will appear over the healthbar, marking the amount of health lost. Each consecutive hit the player delivers against enemies will replenish replenishes some health based on damage dealt; however, should the player take a direct hit, the remaining green bar will disappear and the health recovery effect will be lost. In addition, characters now have access to an Aerial Special Attack.

Another major addition are the Star Moves; these are limited use moves which consume the star icons below the player's healthbar and deal massive damage to multiple enemies at once, while also making the player completely invulnerable for its entire duration (except for a few, namely Shiva's Spirit Dance and Max's Iron Will). Players always start with one Star Move by default at the start of each stage, and can find hidden around the stages are Star icons, which add a Star Move stock when collected.

In order to prevent the classic infinite jab combo, where the player taps the jab button, pause and repeat, essentially locking opponents infinitely, the developers added a limitation where all enemies will fall down after taking up to 8 hits.

During Story Mode, players can pause the game and select "Retry" at any time, restarting the stage, as well being able to change character. In addition, when retrying, the player can pick "Assists", which are namely increased lives and Star Moves; however, doing so adds a penalty to the score the higher the assist.

The game can be played locally with up to four players, while online play allows up to two players simultaneously. After each stage players are graded on their performance, with points being added to a meter which serves to unlock the retro characters. In addition to the main Story Mode, the player can also unlock a Stage Select, as well as Arcade Mode and Battle Mode.

Training Mode allows the player to practice against dummy opponents or to play various lessons to learn combos. Players have control over enemy placement and items. New enemies to be placed can be unlocked by defeating them on Survival Mode.

Survival Mode is set up as a simulated virtual reality training created by Dr. Zan, using data from Mr. X's brain. In this mode the player faces off against endless enemy waves of ever increasing difficulty. In between waves the player can pick up random power-ups and buffs to aid against the upcoming challenges. In addition to the normal enemies, "retro" enemies from the Genesis titles also appear. After each run the player will get experience points based on their score, which will unlock alternate moves. There are 4 different backgrounds (with variations), plus 8 retro backgrounds.

*Health items can be customized in the options menu to change their appearance. Doing so has no effect in their potency, being just a cosmetic change.

All weapons below are exclusive to the Mr. X Nightmare DLC, and must be unlocked in Survival Mode first. After that, some of them can be found in the Story and Arcade Modes.

As well as the new characters, the classic, sprite-based versions of the cast from the previous games can be unlocked.

During the stages, the player can find hidden levels by hitting the breakable arcade machines with a taser gun. These levels consist only of short fights against bosses from Streets of Rage 2. If won, players will be awarded with a Power Star.

If players die in this level it won't trigger a game over; instead they'll be sent back to the normal level. Regardless of winning or losing, players are sent back at full health.

Rumors of a fourth entry in the series being in development have circulated since the mid-1990s. Following the success of Wonder Boy: The Dragon's Trap, a 2017 remake of 1989's Wonder Boy III: The Dragon's Trap, publisher Dotemu and developer Lizardcube approached Sega about creating a sequel in the Streets of Rage series. Sega agreed and production on the game began in the beginning of 2018, with the game publicly announced on August 27, 2018. The game is co-developed by Guard Crush Games, using a modified engine from their Streets of Fury game. It was released for Microsoft Windows, Nintendo Switch, PlayStation 4, and Xbox One in April 2020.

The soundtrack is mainly composed by Olivier Derivière, with participation of original series composers Yuzo Koshiro and Motohiro Kawashima, along with Yoko Shimomura, Harumi Fujita, Keiji Yamagishi, Scattle, Das Mörtal, XL Middleton and Groundislava. Koshiro was not a part of the project at first, but joined after playing a demo of the game at BitSummit, an indie game showcase in Kyoto, in June 2019. He cited fan requests and how the game was coming along as reasons for joining. Initially Hideki Naganuma was supposed to be taking place of Fujita, but in March 2020 Dotemu announced that he would no longer be composing for the game due to scheduling complications.

According to Jordi Asensio, a game designer at Guard Crush Games, Joe Musashi from the Shinobi series was proposed as a playable character, along with other Sega characters outside of the Streets of Rage series, but the idea was turned down by Sega of Japan. 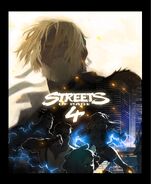 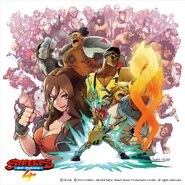 Streets of Rage 4 - Behind the Tracks

Streets of Rage 4 - Behind The Gameplay

Streets of Rage 4 - Behind the Art

Streets of Rage 4 - Behind the Music