Though Nora herself doesn't appear in the game, a version of Electra with her name functions as an enemy of Stage 3, accompanied by L.Lisa.

She returns as the boss of Stage 3. She is constantly aided by Galsias, whom she can whip to power them up, granting them more health and super armor, switching their names to "Galsiaaaaa" and changing their hair to shining yellow as a result. After her defeat, she goes into a breakdown to crash the ship into the pier.

In Stage 11, three palette swaps of her simultaneously appear before facing Mr. Y: two of them with lower health (Belle and Queen) and one of them (Stiletto) acts as a mini-boss. During this fight, no Galsias will appear, meaning the player won't fight any powered-up Galsias like in Stage 3. Stiletto has additional super-armor properties when attempting to use the whip.

Nora's artwork and color palette for Streets of Rage 4. 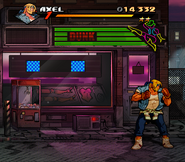 Nora's outfit showcased in Stage 1 of Streets of Rage 4.