Murphy is a police officer wearing a riot helmet and a Kevlar vest with shoulder pads. They utilize a wrist-mounted shield on one hand and a melee weapon the other, usually a nightstick, though some variants deter from this.

Before engaging in a fight, they will activate their energy shields that allows them to deflect attacks until it shatters. The shield will regenerate if he's not attacked for a while, and he will activate it again as soon as possible.

When holding a weapon and with their shields up, they will walk towards their opponent and whack them with it. Unlike Barney, Murphy won't try to pick up his weapon if dropped, resorting in using a single punch. If the shield is activated, but doesn't have a weapon in hand, he'll try to bash their opponents with the shield, causing knockback only.

Like other police force members, they will fight any Syndicate members on sight.

Dunphy is a Syndicate counterpart to Murphy and simply boasts more health than Murphy; he also will not attack any Syndicate members due to being one himself. He wears white clothes with a black visor, boots and vest.

Sand wears beige armor and wields a taser instead of a nightstick; his attack has a short lunge to it and will stun the player if it hits them. Sand also does not attack Syndicate members.

Shadow is the most unique of the Murphy variants: wearing a pitch-black set of gear, he moves quite quickly and throws shurikens. He only uses his shield to block projectiles, deactivating it at all other times. He has the same health as Murphy.

The formerly unused Ralphy now appears in Survival Mode. He wears a red uniform, and spawns with a halberd. He has the same attacks as Murphy, but the halberd gives him very long reach. His health is similar to that of Dunphy and Sand, but his shield has much more health. Ralphy also moves faster than Murphy, Dunphy and Sand. 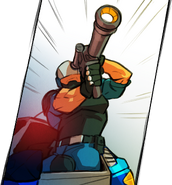