Murphy is a character from the Streets of Rage comic.

Murphy is a police officer and one of the few honest cops in the city. He first appears alongside Blaze Fielding watching over Axel Stone, who had been beaten by a group of corrupt cops. They have a short argument, after which Murphy gives Blaze a transceiver for her to call him if she needs nelp. Both Max Thunder and Blaze end captured by Hawk and taken to a factory, with Max picking up the transceiver after freeing himself. Murphy appears with a small group of agents and bomb the place as Axel and Blaze escape, with Max escaping after defeating Hawk.

Later on it is revealed Murphy is the stepfather of Skates, though the two don't have a good relationship. He had collected data on various high-ranking corrupt police officers and compiled into a diskette. Since his phone had been tapped, the criminals find out about the disk and send a group of corrupt cops after him, who kill him and search for the disk to no avail. Learning of his stepfather's death Skates find the disk, later turning it to a district attorney. 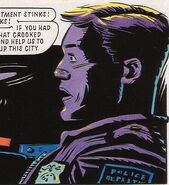 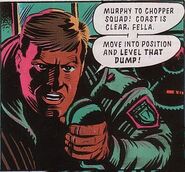 Add a photo to this gallery
Retrieved from "https://streetsofrage.fandom.com/wiki/Murphy?oldid=7587"
Community content is available under CC-BY-SA unless otherwise noted.