Ms. Y is Mr. X's daughter, and Mr. Y's twin sister. She and her brother took over the Syndicate Crime Organization after their father's death, seeking to rebuild Mr. X's criminal empire. After doing secret experiments the two created a device to mind control people and began organizing the new Y Syndicate to take over Wood Oak City. Mr. X's former right-hand man, Shiva oppose the Y Twin's new syndicate, due to not only because his students defect to the new criminal empire, the new organization itself happens to have conducting unethical experiments on animals, much to a reformed Kempo master's dismay.

She first appears in the cutscene after the 9th stage after the heroes save Max Thunder from her mind control. She attempts to brainwash the heroes but they're saved by Estel Aguirre, who crashes their sound device. Along with her brother, she escapes the place in a helicopter.

She travels to Y Island, where she awaits the heroes in the throne room of the castle there. She engages the heroes in combat, showing off her skillful swordplay, but flees when the tide turns against her. She goes to the roof, where her brother is waiting, and the two of them team up for a last stand against the heroes. In the end, they are defeated, and both are arrested by Adam Hunter.

- Forward Stab: Her standoff attack that she uses if the player approach her directly. There is a very short delay when she begin attacking so this attack can be avoided by moving aside.

- Grab and Slash: She attempts to grab the player and after she does, she will strike the player with a downward slash. She flashes red right before she attempts to do this. Can be interrupted with a timely jumping kick or most player characters' forward dash attack.

- Jab Attack: She attempts to rush in front of the player and attacks with a series of rapier stabs. She flashes white just before she do this and she is immune to flinching when she flashes. There is a short delay when the attack animation starts and there is a maximum distance that she can walk before she begin attacking so it can be avoided either by moving away from her or moving to the side.

- 3 Stab Combo: A series of 3 attacks with her rapier. Once the second phase begins, this replaces her forward stab.

- Lightning Dash: She jumps to a corner and performs an electrified running stab. She points her rapier upward with an obvious telltale sound just before she attempts to do this. She always perform a series of 4 attacks with this. Just after she perform 2 attacks she will jump to one end of the room in preparation to perform 2 more, during this time if the player happens to be in the right place it is possible to hit her and prevent her from performing 2 more attacks. After she completed all 4 strikes she will stop moving and 'catch her breath' for a short time during which she is very vulnerable to attack.

Initially she fights defensively and tries to keep the player at arms' length with her forward stab and jumps around if the player gets too close though once in a while she might attempt to use her 2 special attacks. Once she lost a portion of her HP, she will begin using all her abilities. In addition she will move faster and attack more aggressively. It is possible that she will destroy the armor sets in the room in if the player haven't done so that a Shadow will spawn alongside a food item. She runs away once her health is low.

She is fought again shortly after, in a dual boss fight with her brother. In this fight she will use all of her abilities at the start though it is easier to avoid her attacks because of the larger area. Once either of them loses 30% of health, that twin will jump in the background and return in the Y Mecha for the final boss fight. In the patch update after losing 70% of health the twin will jump in the Y Mecha and that twin will regain all of his/her health. If the twin in Y Mecha is defeated first, the second twin will jump into the mecha to continue the fight. 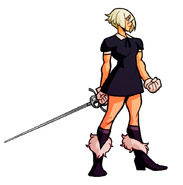