Mr. Y is the son of Mr. X and the twin brother of Ms. Y. Along with his sister, the two took over the Syndicate Crime Organization after their father's death, seeking to rebuild their father's criminal empire. After doing secret experiments the two created a device to mind control people and began organizing the new Y Syndicate to take over Wood Oak City.

Mr. Y is the most active in the story, first appearing in the cutscene after the second stage where he attempts to bribe the heroes but guns them down when they refuse his offer. He appears again after stage 7, using a rocket launcher to shoot down the train where Estel and the heroes were fighting, despite it being full of civilians.

Mr. Y is then seen again alongside his sister, Ms. Y, in Y Tower, where they use their mind-control music to force Max Thunder to fight against his old friends. However, Max is defeated, and then Estel raids Y Tower and destroyed the speakers playing the mind control music. Mr. Y stops his sister from fighting the heroes right there by reminding her they have a concert to get to.

After the heroes disrupt the concert, Mr. Y gets on a plane to escape to Y Island, but the plane is boarded by the heroes. Mr. Y engages them in battle but is defeated. However, instead of surrendering, he instead jumps out of the plane, shooting the controls as he does so, and forces the plane to crash-land on Y Island.

He's last seen on the roof of the Y Island Fortress, where he fights alongside Ms. Y in a last stand against the heroes. However, they are defeated and placed under arrest by Adam Hunter.

Mr. Y is fought as a boss in the penultimate stage. He mostly uses an Uzi to shoot the players from a distance similar to what Mr. X do in previous games. Since he lacks Mr.X' melee attacks, he will attempt to run if the player comes close to him. He rolls away from the player immediately upon getting up. Once he powers up, he starts using his grenades and rocket launcher. He will pause for a moment when he is priming his grenades during which he is immune to flinching, and he will throw the grenades as he jumps to the other end of the room. It is possible for players to pick up the grenades and throw them back at him. When he is kneeling down to fire his rocket launcher, he is immune to flinching but he may still be knocked down with a jumping kick, some special attacks, or by throwing back his own grenades which will effectively cancel it. The rocket can be fired diagonally and he will always aim it directly at the player or as close as possible if the player is outside the firing arc. The rocket can also be avoided by jumping at the right time. 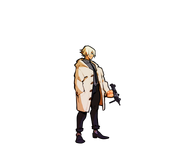