Floyd originally worked in construction, but an accident cost him both of his arms. The company he worked for didn't help him, however, preferring to spend their money on lawyers. Then help came from Dr. Gilbert Zan, who built him a new set of robotic arms powered by Rakushin, after which Floyd became his assistant and apprentice. When Blaze Fielding contacted Dr. Zan for help to take on the new Syndicate, Floyd offered to go in his place.

Floyd plays as a mix of both Max Thunder and Dr. Zan, with slow movement and a moveset based on wrestling/grappling techniques, with the added benefit of the bionic arms which allows him to grab enemies from a distance, smash enemies against each other and use electrical discharges.

Floyd's bio from Streets of Rage 4. 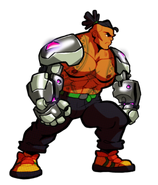 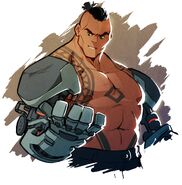