Eddie "Skate" Hunter, known as Sammy Hunter in Japan, is a playable character from the Streets of Rage series. He is the younger brother of Adam Hunter from the original game, and first appears in Streets of Rage 2, along with Max Thunder, to help Axel Stone and Blaze Fielding look for his kidnapped brother.

Skate returns in Bare Knuckle III mostly unchanged, though now his jeans shorts are in a shade of bluish-white, and beneath the yellow tanktop he wears a short-sleeved black shirt, which is tucked into the shorts while the tanktop now flows freely outside. In the American version, Streets of Rage 3, Skate's color scheme has some changes: his red rollerblades, gloves and cap are all sky-blue, and his yellow tanktop is now red.

Skate is a typical young man at heart: possessing the latest style, the latest lingos in speech, and slightly rebellious, though with sharp street-smarts which prove to greatly help his friends in critical times. He looks up to his big brother, Adam, as a role model and mentor, who trains in martial arts alongside him. Skate's warm acquaintance towards Axel and Blaze turns to loyal allies in order to save his older brother's life in Streets of Rage 2. His bond with the others continues in Streets of Rage 3.

Eddie lived in the city with his brother, Adam, who had returned to the police force after the events of Streets of Rage. One day, when he returned from school, he found his house a total wreck, and there was no sign of Adam - instead, attached to the front door of the house, he found a photo of Adam chained to a wall at Mr. X's feet. He tried to call the police, but no one at the station had seen Adam that day. He then called Axel, who came over with Blaze to investigate. Realizing his older brother had been kidnapped by the Syndicate, Skate joined Axel, Blaze, and Max Thunder, long-lasting friend to Axel, to rescue his older brother from the Syndicate's clutches.

When Dr. Zan revealed the Syndicate's latest plot, Adam was unavailable due to his duties to the police, so he sent Skate to represent him. Skate was initially distrustful towards Dr. Zan, believing he was plotting to lure them into a trap.

Skate does not appear in the story of Streets of Rage 4, his primary role as the light, fast fighter instead being taken over by his niece, Cherry Hunter. Both his Streets of Rage 2 and Streets of Rage 3 appearances are unlockable and playable. According to the developers, Skate is now grown up, due to the game's timelines takes place ten years after the third game.

Skate is the fastest character in the series, as well the smallest, meaning his small hurtbox means he can sometimes avoid getting hit by attacks that would hit other characters otherwise. To compensate his fast movement and attack speed, he has poor range and low damage output.

In his debut in Streets of Rage 2, Skate is the only character that can dash, by pressing forward twice. In Streets of Rage 3 all characters can perform a dash, but Skate boasts from having the second fastest after Shiva's. 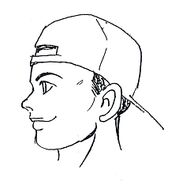 Skate's bio from Streets of Rage 4.