Cherry Hunter is a playable character first introduced in Streets of Rage 4.

Cherry is Adam Hunter's daughter. While she inherited her father's fighting skills, she didn't desire to become a police officer like him and thus decided to pursue a musical career. She became a guitarist and plays at the city's night clubs. When Blaze Fielding calls upon Adam to help taking on the new Syndicate, Cherry goes in her father's stead, as he was busy with another assignment.

Cherry is a slightly muscular Black-American girl with red hair. She wears ripped jeans, a yellow shirt, sports bra and wraps down her arm. Whilst fighting, she keeps her guitar on her back so that it’s ready to use during combat.

She’s a youthful, energetic, and fiercely independent young woman. She loves her father and displays her affection openly.

Cherry fills the role of the fast-but-weak character in the game, which was filled by her uncle, "Skate" in the previous two games in the series. She has the best mobility, being the only character able to run, while her moveset is based around quick strikes and special moves in which she utilizes her guitar.

Cherry's bio from Streets of Rage 4. 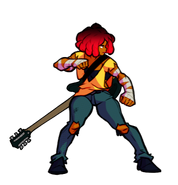