Bongo, also known as Big Ben, is a recurring enemy in the Streets of Rage series, appearing in all games.

Bongo appears as a large, bald and obese man of oriental descent wearing suspenders. From the second game onwards he also wears a baseball cap.

In the original Streets of Rage, he is the Stage 4 boss. His moveset entails only running diagonally across the screen breathing fire. A player must beware grappling Bongo from the front, since he is heavy enough to counter most throws by simply landing on the player, causing massive damage.

In Streets of Rage 2, his size decreases drastically. His arsenal of moves gets larger even adding a menacing laugh. He makes another appearance in the game on stage 4 (The baseball) stadium. He will also appear to assist the main boss in Stage 5 (The Ship).

In Streets of Rage 3, he appears again on the second part of the first stage and throughout the game. Seems he has added a sort of "circus roll" attack to his arsenal in this game. He will get up dizzy and take a moments time to recover and is able to perform a tag team with Galsia by throwing him towards his enemies while the latter performs his elbow drop. Just like the first game, this version cannot be thrown, as he's again able to squash the player under his weight. Shiva is the only playable character able to counter this.

In Streets of Rage 4, he re-appears again. He shows up more often than previous games. Like in Streets of Rage 2, Bongos can be thrown by any character, though the middleweight characters (Axel Stone, Blaze Fielding, and Adam Hunter) will require effort to lift their sizable girth to throw or slam them. While he can no longer pick up and throw Galsia's, his rolling attack however now has a pinball effect (where he will collide with any surface and accidentally hit their own allies.) 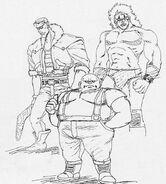 Add a photo to this gallery

Retrieved from "https://streetsofrage.fandom.com/wiki/Bongo?oldid=9378"
Community content is available under CC-BY-SA unless otherwise noted.