Bongo appears as a large, bald and obese man of Asian descent wearing suspenders. His moveset entails only running diagonally across the screen breathing fire. Grappling Bongo is a bad idea, since he is so heavy that he counters nearly all throws by simply landing on the player, causing massive damage. 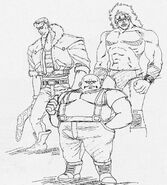 Streets of Rage
Community content is available under CC-BY-SA unless otherwise noted.
Advertisement