Axel Stone (アクセル) is one of the main protagonists of the Streets of Rage series. Along with protagonist Blaze Fielding, he has appeared in every game of the series.

Axel is shown as the leader of the group, due to his prominence, all-around skills, and "classic beat-em-up look". In SOR3, he plays the role of a slow-but-powerful character, succeeding Max from SOR2 as well as Adam from SOR1.

Axel makes his debut in 1991's Streets of Rage as one of the three cops who quit the city's corrupt police force, in order to personally hunt down the syndicate leader themselves. Along with Adam Hunter and Blaze Fielding, he manages to defeat the syndicate leader (later named Mr. X) in his own headquarters.

One year later on the anniversary of Mr. X's defeat, Axel (who has left the city to run a martial arts dojo/become a bodyguard in the EU/Canada manual) discovers that Adam has been kidnapped by a returned Mr. X, as a lure to bring Axel and Blaze to him in retaliation for his prior defeat. Along with Blaze, He joins up with Max Thunder and Adam's kid brother "Skate" to defeat Mr. X once again and free Adam and the city.

BKIII has Axel rejoining the police force after the events of Streets of Rage 2, and aiding Blaze and newcomer Zan in trying to uncover and prevent bombs hidden throughout the city from detonating, as well as fighting off a new group called Neo-Chaos.

In this Sega of America produced version (edited to lighten the game's tone), Axel is still running a dojo outside the city, and is called on by Blaze to assist her, Skate and newcomer and ex-syndicate member Dr. Zan in shutting down a seemingly resurrected Syndicate.

Axel is commonly considered the easiest to use due to his simple multiple hit special attacks. By SOR3, he is still well-rounded, but also quite a powerhouse in many aspects.

Axel seems to use a mixture of boxing, karate, kickboxing and street fighting moves to create his fighting style. Flames are used to give some of his moves a visual flare, but are never used to actually burn/immolate his enemies.

His attire also changes throughout the series, going from a muscle shirt with blue/gold gauntlets, to a standard tshirt with red gauntlets, to a sleeveless shirt, red gauntlet look. Despite the changes, Axel is always featured in a white shirt and sneakers with blue jeans and headband (except for SOR3, where he is depicted with a yellow shirt and black jeans, aka the Adam Hunter look).

Axel Stone appears as a playable character in SEGA Heroes. He is a Blue hero and utilizes a few moves from his own games, such as punches. 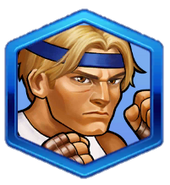 Home Run
Add a photo to this gallery

Streets of Rage 4
Add a photo to this gallery 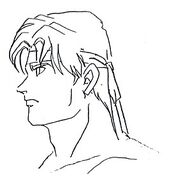 Axel's concept art sheet for Streets of Rage 4
Add a photo to this gallery
Retrieved from "https://streetsofrage.fandom.com/wiki/Axel_Stone?oldid=7826"
Community content is available under CC-BY-SA unless otherwise noted.