Streets Of Rage Wiki
Register
Don't have an account?
Sign In
Advertisement
in: Characters, Playable Characters, NPCs,
and 3 more

Adam is an African-American man in his mid 20s with short dark hair. He wears, a yellow t-shirt or tanktop (the latter having black shoulder pads), black fingerless gloves, black pants, and motorcycle boots. In his Streets of Rage 4, he wears green sunglasses and his hair is more shaved on the sides, sports a yellow muscle shirt with sleeves rolled up into his biceps and an ample V-shaped neck which he leaves unbuttoned (exposing part of his pectorals), ditches the shoulder pads in favor of suspenders, and his boots gain an armor-like appearance with yellow plates/guards.

Adam is seen as a cool, handsome man who never gives up a fight. Though mostly serious at times, he occasionally displayed a witty sense of humor, as seen in Streets of Rage 3.

Adam makes his debut in 1991's Streets of Rage as one of the three cops who quit the city's corrupt police force, in order to personally hunt down the syndicate leader themselves. Along with Axel Stone and Blaze Fielding, he manages to defeat the syndicate leader Mr. X in his own headquarters.

One year later on the anniversary of Mr. X's defeat, Adam is ambushed at his home and taken hostage by Shiva, Mr. X's personal bodyguard as lure for Axel and Blaze to mount a rescue effort. Adam's kid brother "Skate" joins up with them, and manages to rescue Adam in the ending of the game.

Adam is once again a non-playable character, sending Skate to aid the team in his stead. However, he is key to providing the location of the final stage (if the General/Chief is saved) or locating and dismantling the rest of the bombs (if the General/Chief dies). He later appears with the team after the credits.

By the time of Streets of Rage 4 Adam became a Special Forces agent, despite having planned to retire from the police to care for his daughter Cherry Hunter. He was assigned into a task force to infiltrate the new Syndicate.

Adam is unlocked after completing Stage 4. As Estel approaches the team, he appears to defeat her. He urges the others to go, telling them he is right behind them. He has a key role in the rest of the story, and is the one to arrest Mr. Y and Ms. Y in the game's credits.

In the original Streets of Rage, Adam is defined as a powerhouse, being the slowest but also the strongest out of the three playable characters. He has an above average jump, stamina and endurance. His movelist was very limited, with no real "special moves" like characters featured in Streets of Rage 2 and Streets of Rage 3.

In the fangame Streets of Rage Remake, he is developed a bit more and has more definition in his moveset. However, he still is not as fine tuned as Blaze or Axel, as some of his special attacks can be prevented from opponent’s counters.

For his return in Streets of Rage 4 Adam became the more balanced character, with good range, great mobility and a new moveset (some of which was influenced by his Remake moveset), reinforcing his boxing fighting style. Unlike his powerhouse fighting style from the first game, Adam is more technical and excels at launching opponents in the air. He is unique as he can perform quick hops to approach his opponents or going behind them escaping attacks, performed by tapping forward twice. Another unique feature is that his standing jump allows to simultaneously hit in both direction making it very effective when surrounded. His moves are associate to that of wolf and green crystal-aura swords.

Adam uses a form of boxing with a large amount of kicks added into his moveset, more closely resembling kickboxing than actual traditional boxing. In the first game he is notable for his raw attack power, most notably in his normal combo, with the uppercut-to-roundhouse being particularly devastating. This carries over to Streets of Rage 4, where he can use the uppercut to juggle his opponents, while the roundhouse kick is useful to start wall bounces. Streets of Rage 4 also gave Adam moves that were inspired by his updated moveset in Streets of Rage Remake, most notably his neutral jump kick.

Adam lacks much of the characterization of his Streets of Rage 2 and Streets of Rage 3 counterparts, despite being featured in some capacity in every game. One notable aspect to his physical appearance is the removal of the shoulder pads he wore during the events of Streets of Rage in the subsequent sequels.

Adam Hunter appears as a playable character in SEGA Heroes. He is a Yellow hero and utilizes a few moves from his own games, such as kicks. His design is based on his appearance in the first Streets of Rage game.

He has special attacks with knives and any long weapons (baseball batt, stick or pipe). Nothing special with the sword, however, he can deliver a long range slice with it which becomes very useful in dealing with hoards of opponents. 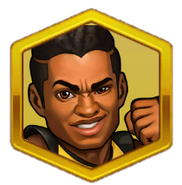 Adam's bio from Streets of Rage 4. 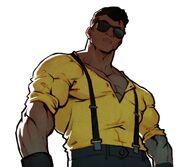 Adam handcuffs the Y twins and takes them into custody.

Adam getting awarded for his deeds.